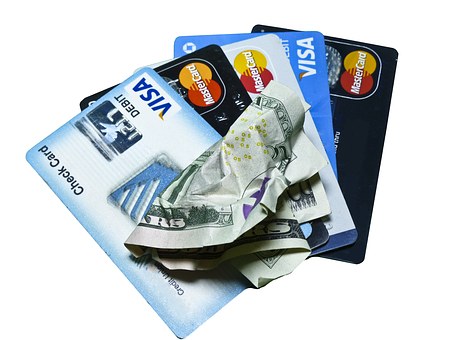 For the big four U.S. retail banks (Wells Fargo, Bank of America, Citigroup and JPMorgan) 2017 saw a 20-percent increase in credit card losses. These four banks suffered $12.5 billion in losses from unpaid and defaulted credit card debt, which is almost a $2 billon rise from what they stated they losing in 2016.

An increase such as this would indicate that the average American consumer is having trouble keeping up with their monthly payment obligations. Which would make sense if people use credit cards to get from paycheck to paycheck. This is a vicious cycle, the consumer needs more spending power to make it through the month or to cover an unexpected expense so they lean more heavily on a credit card, but this is the reason why you have to wait for payday since a chunk of your paycheck is already spoken for with a monthly credit card payment. It’s easy to see how this can spiral out of control and how these retail banks can see such huge losses.

You would think that with such losses, these banks would lay low and try to stop the bleeding, but instead you see advertisement after advertisement of banks trying to reel you in to open up a credit card at Bank X or Bank Y, offering perks like airline miles or cashback on your purchases.

So, what’s going on here? Despite suffering what seems like huge losses, credit cards remain incredibly profitable for banks and worth the risk in pursuing. An issuer makes money on two fronts when it comes to credit cards, the first is that the vendor is charged a fee every time a transaction is processed. The second avenue is that the banks get to charge high interest rates and also additional fees to those who have trouble keeping up with their payments.

The credit card market is highly competitive between the banks and because of this ratcheted competition, banks are signing up people that aren’t the best candidates for creditworthiness, particularly taking aim at millennials. Think back to your early twenties, fresh out of college with your first credit card…scary. It’s not a surprise these banks are in the red with credit card debt.

Aside from targeting groups that are at high risk of going into default, there might another explanation for why banks are experience such a steep and growing increase in losses—debt settlement companies.

Debt settlement companies offer an alternative to those who are over-burdened with credit card debt. These companies negotiate with a person’s creditors to allow you to pay a lump sum to settle your debts, which is typically a smaller amount than what you actually owe. For better or worse, this options has become increasingly popular.

If a person makes purchases with their credit card and settle to pay a considerably reduced amount than what is actually owed, it does not take an economist to see that this is a bad investment for the banks. A return on debt that’s pennies on the dollar can certainly led to such a massive loss.

Credit cards can be a blessing or a menace and it takes discipline and responsibility to navigate its pitfalls. In the iconic words of Uncle Ben—with great power comes great responsibility.

This site uses Akismet to reduce spam. Learn how your comment data is processed.

Previous Article 6 Way to Help Pay Student Loans Off Faster
Next Article More for Less: What High Yield Savings Accounts Can Do For You